It seems that the astroturfing of Calgary has begun, with the Manning Centre sitting right behind it.

Common Sense Calgary has been launched using funds from the Manning Centre.

Started with $10,000 in seed money from the Manning Centre, content for the website is being provided by the Manning Foundation.

“It’s not a charity, it’s not a not-for-profit, we are not soliciting contributions,” Billington said. “It’s an initiative of a group of private individuals.”

A few moments of poking around their website makes the agenda pretty clear.  The news page is filled with an assortment of articles that are critical of incumbent mayor Nenshi's positions (if you scroll down their news page, there's rather a lot from the Calgary Sun ...). 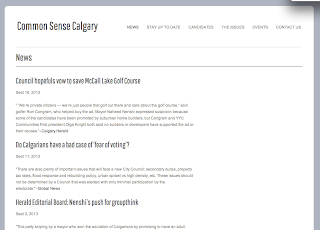 Looking a little further through Common Sense Calgary's website, their position on key areas are classic conservative positions (with all of the nuance of a sledgehammer), and mysteriously they are backed up by reports published by the Manning Centre. 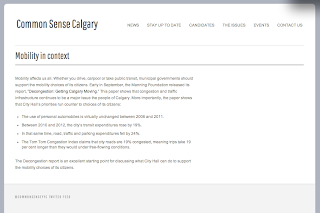 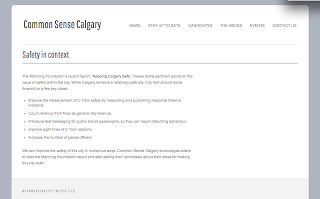 ... and when the man at the front of the organization is Rick Billington, a man with unquestionable ties to the local CPC power structure, it seems even less likely that this is anything but an astroturf organization.  Consider that this group is funded by the Manning Centre, and if the Calgary Sun is correct using some of the $1.1 million from the developers community.  This doesn't sound like anything remotely resembling "grassroots".

[Update]
In today's Calgary Herald, there is a similar article, but it attempts to claim that this is going on "across the board":

The city’s labour unions are the other traditional big interest in civic politics, bestowing money on progressive candidates and encouraging their thousands of members to vote and volunteer for them.
In this fall’s campaign, the unions for city hall and transit staff are working more closely together than before, and will choose preferred candidates in many wards.

“What we’re looking for is ideally candidates we can work with and candidates that won’t target labour,” said Alex Shevalier, president of Calgary and District Labour Council, an umbrella group for unions. He warned of politicians who may outsource civic jobs or press to cut worker benefits and wages.

“They very much want to end city planning as we know it and understand it, and it would be a very libertarian approach to city council,” said Shevalier. “And one person’s red tape is another person’s due process.”

The labour council is co-ordinating unions’ efforts and has its own knowyourcanadidates.ca campaign website.

The difference here?  The labour council's knowyourcanadidates.ca website is informational at this stage - it tells you who your candidates are in a given ward.  They apparently have a survey out to all of the candidates, but so far the results haven't come back yet.  The nature of the survey is not known to me at this point.

At least the site is upfront about the fact that it is being funded by the Calgary Labour Council - unlike the Common Sense Calgary group whose website tries to portray it as being a "bunch of concerned citizens", when it is being funded and facilitated by a political think-tank.
[/Update]