There is an enormous amount of noise being made about the alleged advantage that transgender women have in athletics.  First, let me start off by saying that the topic of athletic performance is not an area of expertise for me, so what follows is largely my opinion, bolstered by observations about what I see in the academic materials published.

Broadly speaking, the claims of "an advantage" hinge around the development of secondary sex characteristics from a male puberty.  Generally speaking, these claims fall into a small range of categories relating to skeletal structure, muscle mass, and height, and so on.

A superficial look would suggest that a male certainly does have "an advantage" in athletics, and to some extent that is borne out by marked differences between male and female record performances in various forms of athletics.  However, it's a much more complicated discussion when we start talking about transgender athletes.

Bill C-6's next step is on to the Senate once the House of Commons holds a third reading vote.  I expect the usual suspects like Senator Plett will do their level best to muddy the waters and confuse things.  Let's take a closer look at what the uproar is really about.

Over at The Economist, we have a somewhat simplistic article blathering away about how there's a backlash happening against "Gender Ideology".

I'm not going to dissect the article in detail, because there's a more important point that needs to be made here.  The concept of "Gender Ideology" is fundamentally a creation of the various anti-transgender groups in an effort to define the discourse.

The problem with the term is that it is fundamentally a straw man in the first place. A variety of people opposed to transgender rights contributed to the "idea" that there is such a thing, be they "TERF"s, hardline religious types, or more recently the so-called "Gender Criticals".

Doubling Down on Racism - The Chris Champion Edition

Over at the Dorchester Review, we find one Chris Champion doubling down on his position that the "Indian Residential Schools (IRS) really weren't all that bad".

The dust-up on Twitter starts a few days ago, but culminates in a series of posts like this one, depicting students "having an absolute blast on that play structure", for which the poster got well blasted in the responses. 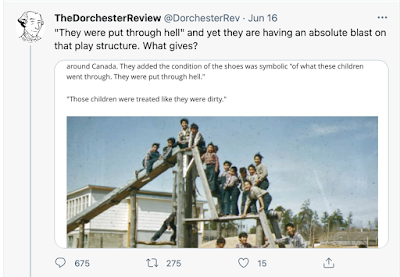 First of all, I will point out that WWII Nazi propaganda showed us pictures of smiling children in concentration camps, and prisoners playing football - that doesn't change the brutality of the conditions they were kept in - it was still propaganda.

For context, the Dorchester Review is a quasi-intellectual publication operated by the same Chris Champion that led the writing of the much criticized Social Studies components in the Kenney Government's proposed curriculum revisions - we'll come back to that.  For now, I want to focus on what the Dorchester Review's Twitter account has posted, and an article that was published on their website this morning.  Given the tone and tenor of what is written in the article, and what I have seen on Twitter, I assume that whoever is running the Dorchester Review Twitter account is either Chris Champion himself, or someone very close to Mr. Champion. (does it really matter?) 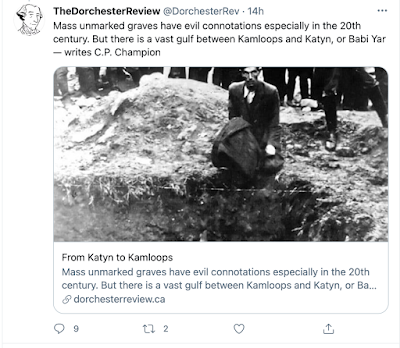 Which just happens to link to an article on the subject written by Mr. Champion.  Let's take a closer look at Mr. Champion's ideas here, shall we?
Read more »
at June 18, 2021 No comments:

So, the Kenney-led UCP government in Alberta wants to hold a referendum on equalization.

I want to bring two points to your attention here. First, is the fact that this is about removing Section 36(2) from the constitution. To put it bluntly, this is a non-trivial amendment to propose (I’ll come back to this in a moment).  Second, is that this isn’t a referendum about opening negotiations with Ottawa about the equalization formulas as they are currently implemented.

If, as Kenney was asserting but a few years ago, equalization is unfair to Alberta, fixing that should be a matter of negotiating new formulas with Ottawa. Of course, in Kenney’s mind, that would mean negotiating with those gosh-darned Liberal elites that Trudeau Junior (add sneer) has installed. No, this is political theatre.  It’s purpose has more to do with creating another grievance politics item that conservatives can bang on about for years to come like they did with the NEP.

Let’s dive a little deeper into this and explore what’s likely really behind all this, shall we?