So, yesterday Michelle Rempel, and 3 other CPC MPs from Alberta put their names to the so-called "Buffalo Declaration".

The name "Buffalo" is a nod to an early proposal to create a province called that from the region of the Northwest Territories that is now Alberta and Saskatchewan.

Synopsis of the Buffalo Declaration

The Buffalo Declaration is a large-ish document, pushing some 13 pages of fairly dense typewritten text organized into 3 major sections.  The first section is a list of grievances, the second part lays out a group of demands, and the third part is a bit political apologetics self-justifying the need for this document.

For the most part, the list of grievances is a rehashing of the usual complaints that we hear from "Western Separatists", with the addition of one or two novel aspects like an attempt to claim Alberta as a "distinct culture".

They then go on to propose a series of constitutional changes which they argue would remedy the problems in the first part.  Much of this reminds me of René Lévesque's "Sovereignty-Association" concept.

The document lays out several grievances:
The first grievance is basically a grab bag of complaints reaching all the way back to the acquisition of the lands from the Hudson's Bay Company.  The authors then proceed to engage in a highly selective reinterpretation of history, conveniently leaving out key details, and transitioning from one complaint to the next while never bothering to explore whether a particular issue had been dealt with. There are several examples of this, but the most egregious being a failure to acknowledge that the 1980 constitution negotiations actually directly addressed a lot of the land and resources issues they talk about.  As one might predict, they also go on to rant about Pierre Elliott Trudeau's much maligned National Energy Program.  All in all, it's basically a rehashing of the same old issues that have been whipped up from time to time for political gain.

The second grievance is more interesting, as it attempts to cast Alberta as a "unique culture" within Canada.  In this section they accuse the Canadian Federal Government of being "colonial" towards Alberta, and then go on to argue that Albertans are a more "independent" lot than the rest of Canada.  Perhaps the great irony here is they inevitably point to our resource economy here as a key part of our "unique heritage", and in doing so return to the usual basis of Western Separatism - economic anxiety.

The third grievance is that Alberta is not connected to the power structures of Canada.  This is largely the usual "but all the power is concentrated in Ontario/Quebec" issue - which they refer to as the "Laurentian Elites" in the document.  There's a laundry list of nonsense in here, ranging from "not enough Senators" (Canada's Senate is regional, not population driven), the usual complaint about how much Alberta "contributes" to the rest of Canada through taxes, and a broad complaint about how Albertans have to *gasp*TRAVEL*gasp* to get to Ottawa if we want to lobby the government - funny - I don't hear BC bitching about that.  Also, apparently we're "underrepresented" in the Federal bureaucracy.  Odd - I thought the bureaucracy's job was to execute the government's agenda?

The last complaint is that we are "treated as a colony" by "The East".  Again, it's largely a complaint about money (it's odd how that keeps coming back up in Alberta's grievances).  "We send so much to Ottawa and get nothing back", etc.  The reality of why Alberta "sends more to Ottawa" has to do with having higher incomes - this has been explained time and again.  Proportionately, we send as much to Ottawa as any other province - there is no "lives in Alberta, pay more" clause in the taxes.  If you make $200K in Alberta, you pay the same federal taxes as you would in Ontario.

Largely, as you might expect, the grievances come down to the usual assortment of economic anxieties that have long fuelled western separatist grievances.  This particular version adds a half-baked attempt at making it a "cultural" matter, but when your cultural issue turns out to be one of money as well, that isn't exactly persuasive, is it?

The first part of the "solutions" is basically a giant whine of "WE WANT AN APOLOGY" (for the NEP, of all things).

Then they go on to the following: 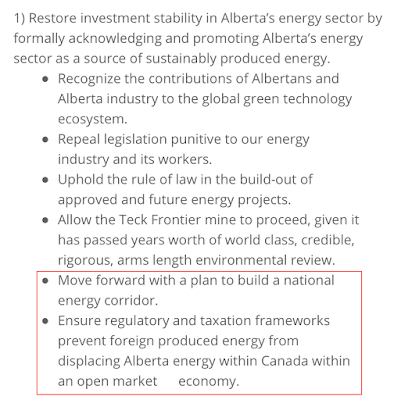 I highlight the last two of these because they basically add up to being another NEP.  I'm not sure that the authors even realize that is what they are demanding, or that their demands are self-contradictory. An open market economy that "prevents foreign energy from displacing Alberta energy" is in fact not an open market, is it?

I don't even know where to start with this one.  What "western based journalists" are there?  Most of our journalism is concentrated in the hands of a handful of powers (e.g. PostMedia), which aren't based in Western Canada (or Canada at all).  Again, this would require completely restructuring the media landscape - undoing the massive consolidation that started with Hollinger.

This manifesto is little more than a rehashing of complaints and grievances that so-called Western Separatists have been bandying about for decades.  They have added a few more pieces for flavour, and tried to whip in some more contemporary issues, but at the end of the day it's largely the same old economic anxieties driving this.

The solutions they propose cannot solve the actual structural problems that are afflicting Alberta's economy today.  We could build all the pipelines these people demand, and it would make no difference - the oil and gas industry is in transition.  Alberta's problems aren't a result of Canada's federal structure.  The problems we face today are a direct result of the energy industry changing dramatically, and the province's abject failure to recognize that is happening.  The blame for this resides firmly in the offices of Premier Kenney, who among his first acts was to dismantle every government program which wasn't solely focused on the oil patch.  Since then 19,000 jobs have vaporized from this province.

The Buffalo Declaration is a political distraction meant to deflect attention away from the damage being done to this province by the current UCP government.