... and Kenney Called The NDP "Ideological"

So, today the Kenney government took the wraps off its proposed K-6 school curriculum:

*I can't guarantee how long this link will be viable, so screenshots will be used to illustrate points.

Kenney bitched and moaned at every turn about the curriculum revision that the NDP was working on.  What is in this is even more ideological than anything that he could criticize in the NDP's efforts.  This isn't just a "step backwards" in terms of educating future generations, it's a walk off an ideological cliff.

Especially in the areas of Social Studies, this curriculum is like stepping back into the 1960s era - an era when the only perspective on Canada's history was defined by British colonialism. Any perspective from indigenous peoples was carefully sanitized out of the picture (and yes, at that time, the "60s Scoop" was forcibly separating native youths from their families and shipping them off to residential schools).

I can't wade through the entirety of this curriculum to identify all of the absolute nonsense it contains, but there is a lot of bias lurking in it, and the biases come out early.  Consider the following elements from Grade 1 and Grade 2 social studies:

First, consider the questionable assumption lurking in the grade 1 element that the indigenous societies on the Canadian prairies were "primitive" (unsophisticated to a European's eyes).  The curriculum then goes on to talk about earth worship spiritualities as part of the belief systems of indigenous peoples.  There is a not so subtle bias playing out here of portraying the indigenous as "primitive" or "simple".

Then in Grade 2, we get a declaration that monotheistic religions have common origins.  Again, a subtle but of priming going on here and it's nasty.  In Grade 1, we prime students with the idea that earth worship is "primitive", and then in Grade 2, we start making declarations about "common roots" for the 3 Abrahamic faiths, but quietly ignores the fact that other faiths arrived at monotheistic models independently.  To a grade 2 student, the logical conclusion to draw would be that the Abrahamic faiths are "more correct" than those "primitive" earth worship faiths.

Yes, this is an example of bias - and it's a fairly subtle one - one that should make us all very wary of the intentions of the authors of this curriculum plan.  Public schools are not places we should be indoctrinating students with ideas about the "correctness" of any faith - explicitly or implicitly.  If you want to talk about different faiths, that's fine, but it has to be done on a level footing, not with all kinds of subtle priming going on to lead students to particular conclusions.

... and just in case you're thinking that I'm "reading too much into this", let me introduce part of the "sex education" portion of the curriculum: 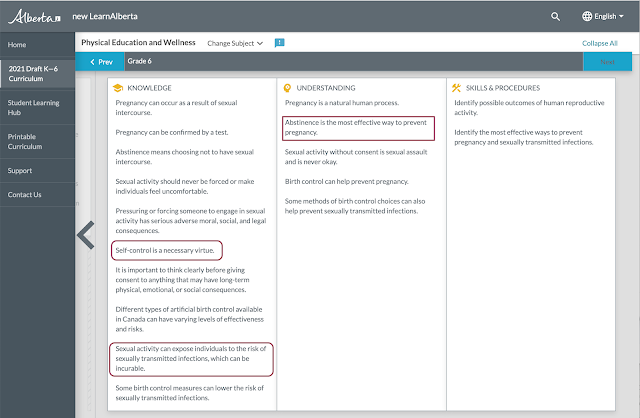 You're not misreading this - we literally have 'abstinence-only' being imposed here.  This is in no way complete or comprehensive.  This ignores reality, and it clearly comes out of the religious right's toolbox of bullshit.  It's basically saying "don't have sex until you get married, or you will become diseased with something awful and incurable".  I won't go on about how this ignores sexual orientations beyond heterosexual, or gender diversity, because the minute you jump down the "abstinence-only" hole, you're already well into Bible-land.

Educators I have chatted with briefly are also critical of this curriculum for over-emphasizing memorization, and doing far too little to encourage integration and critical thought.  This is also not a surprise - Kenney is an anti-intellectual with a serious amount of difficulty with the idea that anyone might be able to think beyond him.

I'm not going to say that I am in any way surprised by this bullshit.  Kenney and the UCP were telling us exactly who and what they are from the get-go.  Albertans voted for this government in droves, many thinking that "oh, they won't be _THAT_ bad".  No, they're _THAT_ bad, and worse. This curriculum is an insidious piece of trash that will put Alberta at the back of the house when it comes to academic achievement.

The transcript of a conversation with Google’s LaMDA AI project escaped into the wild this week, and has created much buzz around the creat...