My headline today is a little misleading.  There’s nothing “creeping” about the UCP government’s fascism - they’re practically steamrolling the province with it right now.  However, in the last 24 hours I’ve seen two things that really concern me.
The first of these is a motion that I consider deeply dangerous from a whole bunch of angles - literally it attempts to create a “civilian militia” like structure. 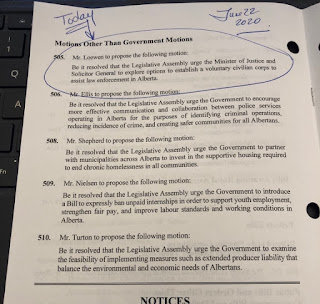 Let me quote this fully:

Be it resolved that the Legislative Assembly urge the Minister of Justice and Solicitor General to explore options to establish a voluntary civilian corps to assist law enforcement in Alberta.

We’ve had a few groups attempt to do this in the past.  Often with less than desirable results.  Often, it has basically degenerated into a small group of thugs roaming the streets looking for someone to attack in the name of “keeping the peace”.  In the deeper, darker past, these kinds of organizations have a nasty tendency to become political weapons.  Essentially they can become the next “brown shirts”.
This is a downright terrifying proposition.  We have enough problems with policing right now as it is. Having a government seriously contemplating the formation of what amounts to a civilian militia which has been “deputized” to enforce the law is utterly terrifying.  This can be construed as the UCP government creating its own private army that it can use for its political ends.
They’ve already experimented with this to some extent.  The “Yellow Vest” and “United We Roll” movements were clearly being encouraged and motivated by political actors.  At their height, they were clearly engaging in intimidation and implied threats to achieve their goals (I’ll point to the role that these groups have been playing in the Co-op Refinery lockout in Regina as a prime example).
This is deeply concerning.
The second bit I wish to rant about is a change that the UCP is making to our school system: 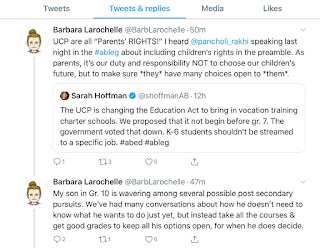 They want to introduce vocational streaming in elementary school grades.  Think about this for a moment.  That means that the school system as a whole is being re-jigged specifically to set a student’s career direction in primary school grades.  This literally puts parents in the position of having to decide their child’s direction far too early in life.  A child who is struggling to learn how to read, or do basic sums in arithmetic shouldn’t have their career path set for them based on who they are at that point in life.

This is a very dangerous path for Alberta to walk.  Politically, it creates an environment where the government can suddenly start to restrict the material that is made available to students along socio-economic lines, reinforcing the socio-economic position of their parents as defining what will be available to their children.

You can start to see the shape of using education to establish a rigid class structure in society.  The wealthy will be able to afford private schools which provide a rich pedagogy and prepares students for advanced study.  In the pseudo-private public system of Charter schools that Kenney is lining up to create, students will be carefully streamed according to the perceived worth of their parents.  Remember, Charter Schools can market themselves to very narrow demographics which will focus who is likely to apply to them.  A public system, such as remains, will be used to provide an absolute bare minimum to those who fall through the filters of wealth and privilege being set up.  Post-secondary opportunities are being tiered based on money, with tuition fees rising rapidly, and students being forced into increasing debt.  It won’t be long before you see a return to the indentured servitude of medieval style “apprenticeships” returning.

Who benefits from all this?  Strangely enough, it’s Kenney’s corporate owners that benefit the most.  They get a workforce that is specifically tailored to their whims, and one that is cowed by the presence of roaming bands of pseudo law-enforcement that will conveniently be just violent enough that no individual will dare cross them.  If that doesn’t tick off a ton of the boxes that describe fascism, I don’t know what does.