I have always had an on-again/off-again relationship with Mr. Coyne’s writings. When he sits down and thinks an issue through its logical consequences, he can be incredibly insightful and make some really good points. Then there are the times when he misses the point of what something is because it conflicts with either his suppositions or personal interests.

His recent commentary on “Re-Shoring” over at The Hub is an example of the latter. Largely, he’s arguing that “Re-Shoring” runs contrary to the principles of “Free Trade”, and the market fundamentalism that says money flows to where it’s cheapest to do certain things. He blithely dismisses the concerns around how countries like China have weaponized their control over certain areas of manufacturing against geopolitical rivals - saying that perhaps we should have “stockpiled more”.

The problem with Mr. Coyne’s arguments is that he is ignoring that modern manufacturing has become increasingly siloed, and runs very much on a “zero inventory” approach to parts.  Part of this is the adoption of so-called “just-in-time” models, where factories order just enough of a sub component for a given day’s production so they don’t have to allocate storage space for spares. (Remember that making its way into automotive manufacturing back in the 1980s?). Further, it’s very rare for any one product to be made solely by one manufacturing facility. The creation of an IOT device like a Raspberry Pi depends on bringing together the output from multiple factories for final assembly in another.

Advocates of Re-Shoring aren’t saying “we need to make things at home so they are made at home” - far from it. What they are really advocating for is a system where the production of goods and provision of services does not become concentrated in the hands of one or two nations whose geopolitical interests may not align well with our own. Chrystia Freeland has referred to this concept as “Friend Shoring”.

There are other reasons that having a reasonable base of manufacturing and services provision “at home” makes good sense.  As we have seen in the wake of Putin’s invasion of Ukraine, unbalanced trading dependencies (e.g. Europe’s dependency on Russian natural gas) can quickly become weapons in times of conflict.  If Europe had a more diversified approach to energy over the last 40 years, the odds of Putin being able to weaponize its energy trade with Europe are considerably reduced. Likewise, when we look to China, their chokehold on the production of a lot of computer products creates an enormous danger for both businesses and society elsewhere in the world, and makes it much more difficult to address an increasingly bullish government in Beijing.

Offshoring took hold in a big way in the 1990s, with so-called “free trade deals” being negotiated all over the place, often between parties who have significant ideological differences. The results of that experiment are clear today, with Russia’s invasion of Ukraine, and China once again actively threatening invasion to annex Taiwan.

These are not coincidental, or incidental to the doctrine of Free Trade.  They are in fact the logical consequences of assuming that deep trade ties would be a moderating influence on the behaviour of all parties.  This is seldom the case.  Even in the world of North America, where “Free Trade” took hold with agreements struck by Reagan and Mulroney, it is hard to argue that Free Trade agreements have stayed the hand of American politicians when it comes to disputes with Canada or Mexico.  Instead, old “grievances” keep being brought up and punitive actions are taken by the larger partner against the smaller (economically speaking) partner.

We also need to acknowledge that allowing goods and services to arbitrarily be “off-shored” also results in a class of workers who are left behind.  The experience of the so-called “Rust Belt” shows us that we have thought very little about how the movement of manufacturing and services affects real people. It’s easy for a business to look and say “well, your job is redundant now, good luck to you”.  Governments need to look at the societal impact of those decisions.  This isn’t to say that occupations don’t come and go, but rather that when we allow wholesale off-shoring of entire industries, we also do our own citizenry a disservice.  Not everybody is suited to the kinds of jobs that remain, nor are they necessarily given access to the kind of counselling and retraining opportunities that will help make a successful career change. As it stands today, the rise of demagoguery and fringe politics is an indicator of how many people feel abandoned by the shifts going on around them.  The rise of those people in our politics is also a very real threat to the stability of democratic government, as Canada learned with the Convoy protests of 2022.

The point that Mr. Coyne’s argument misses is that recent events have shown quite clearly that Free Trade as it has been practiced to date results not in a moderation of all parties, but rather a concentration of trade (and thus geopolitical power) in the hands of those willing to take advantage of the assumptions of Free Trade.  Re-Shoring, or even Friend-Shoring, seeks to address the geopolitical imbalances that have been created. In essence it is a move towards a sense of justice in our economies and geopolitical realities.

While I share some of your observations related to the limitations of Andrew Coyne's assessment, I must also question some of your own suppositions. Friend-shoring is only partly about reducing Canada's dependencies of the "just in time" distribution systems of free trade. But is less about reducing such dependencies than on enabling a bifurcated trade system centred on the dominance of the US and its European allies, while blunting the emergence of China as a counter-weight to that dominance and any danger of China and India asserting a combined strengthen in the future.

Since I think the crises facing humanity over the next two generations will require greater cooperation among all governments, the continuing efforts, led by the US, to exploit a divide and conquer model of economic expansion is problematic. Commentators from the Global South provide many illustrations of how poorly dependence on international institutions led by the US and Europe has not always served their interests well.

To address geopolitical imbalances, and a sense of economic and social justice will require a different realignment of what you euphemistically term geopolitical realities. One that involves less demonization and bullying, and more compromise and reconciliation across differing political viewpoints.

So, last week very serious allegations of the Premier's office attempting to intervene in the prosecutions resulting from the Coutts blo... 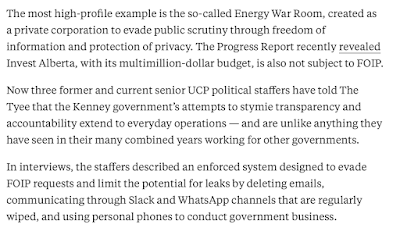