So, the Kenney-led UCP government in Alberta wants to hold a referendum on equalization.

I want to bring two points to your attention here. First, is the fact that this is about removing Section 36(2) from the constitution. To put it bluntly, this is a non-trivial amendment to propose (I’ll come back to this in a moment).  Second, is that this isn’t a referendum about opening negotiations with Ottawa about the equalization formulas as they are currently implemented.

If, as Kenney was asserting but a few years ago, equalization is unfair to Alberta, fixing that should be a matter of negotiating new formulas with Ottawa. Of course, in Kenney’s mind, that would mean negotiating with those gosh-darned Liberal elites that Trudeau Junior (add sneer) has installed. No, this is political theatre.  It’s purpose has more to do with creating another grievance politics item that conservatives can bang on about for years to come like they did with the NEP.

Let’s dive a little deeper into this and explore what’s likely really behind all this, shall we?

In order to understand what they’re talking about, we need to actually look at S36 of the 1982 Constitution Act in its entirety (it’s not long). 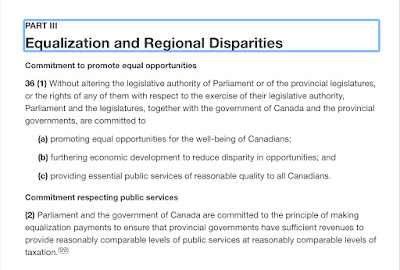 Notice that S36(1) really doesn’t actually commit any level of government to doing anything concrete.  It’s a lot of very high level wording that boils down to setting out the fundamental principle of the equalization program in the first place:  that the role of the governments is to facilitate the well-being of all Canadians.  Second 36(2) creates a concrete obligation that the Federal Government will undertake to transfer money from its revenues to the provinces to ensure that there is comparable funding for various programs.
So, why remove this clause?  There are a couple of reasons that the conservatives might like to do this. First of all, the more libertarian of conservatives love to argue about “equality of opportunity” versus “equality of outcome”.  In their minds, any kind of government funding is a bad thing because it “distorts” the idea of “equality of opportunity”. The second reason for this is that because Alberta absolutely refuses to tax at anywhere near the rates and levels of its provincial peers, so without a major change in Alberta’s thinking about taxation, there is no equalization formula that will send equalization dollars to Alberta. We simply insist on under leveraging the tax base we have.
However, because the proposed amendment would require the application of the 7/50 amending formula described in S38 of the 1982 Constitution Act, it’s not something that Alberta can do unilaterally, nor is it something the Federal Government can do unilaterally either.  So the referendum question itself does little more than create a political context for Alberta conservatives to bray about “equalization”.
A more productive question would have been to ask Albertans for a mandate to open negotiations with Ottawa to revise the Equalization legislation so it better addresses Alberta’s current realities. That, however, is not what the Kenney government has chosen to do, is it?

Why A Referendum At All?

Referendums have become the tool that are used when a government either lacks the political will to do anything concrete, or they want to kill an idea entirely - it’s extremely rare for a referendum to result in a new idea moving forward. This referendum is somewhat different - it’s purpose is in fact to create a political grievance that will become a “political truth” among Alberta conservatives.
Let’s consider why S36 is even in the constitution at all.  After all, it does little more than commit the governments of Canada to sharing funds.  It most certainly does not set out how that sharing will be done, or what the criteria for that shall be.  All it does is commit the government to doing so.  The rest is a matter of legislation that the Federal Government can change as needed.
Section 36 was added to the constitution for a particular reason:  So that the idea of equality of government and government programs could be put in place as part of the federation, and to ensure that future governments could not simply decide to cancel the program for whatever political position they may have decided was fashionable at the moment. One might suspect that Pierre Trudeau had taken a look at the politics of Margaret Thatcher in the UK, and the rising “neo-Conservatives” in the US GOP and decided to put something in as a safeguard to prevent slash-and-burn governments from simply tearing things apart.
Removing S36(2) has the following effect:  It enables a future government to shred the equalization program entirely if it wishes to.  In other words, the next time Canada elects a conservative government, that government can shred the equalization program and walk away from it with no consequences.
However, the 7/50 amending formula means that in order for this to actually happen, conservatives need to control the Federal level, as well as have 7 like minded premiers sitting in provinces.  This is the political equivalent of a “Hat Trick”. That makes this fairly unlikely to occur in the short term.

Why A Constitutional Amendment?

So why go after a constitutional amendment?  That’s a little more complicated, and in order to do that I need to roll our collective clock back to the 1980s.
At that time, the liberal government of Pierre Trudeau introduced a piece of legislation called the National Energy Program (NEP). That set off a row between Alberta and Ottawa that conservatives have been milking ever since. Even today - 40 years on - any major economic policy from a Liberal government is almost immediately cast as “NEP 2.0” or is somehow linked to the NEP.  The NEP became a “truth” in Alberta politics - an example of how an overreaching and hostile Federal Government would happily bring Alberta to rack and ruin.
Conservatives from Alberta have used the NEP very successfully to foster a stranglehold on Alberta politics, in part by demonizing the Liberal brand, and in part by portraying themselves as “heroes that will save Alberta from those dastardly SOBs”.  We see this same pattern repeated today with Kenney, who made “fighting” the “Trudeau-Notley Alliance” a major part of his campaigning.
During that same time, Alberta conservatives spent a great deal of emotional energy nursing an abject hatred of Pierre Trudeau - to the extent that they utterly loathe anything that Trudeau stood for, or created. They particularly despise the Charter of Rights and Freedoms, which they see as problematic because it often constrains how they want to proceed legislatively. The Federal Liberal party choosing Justin Trudeau as their leader - and Harper’s defeat in 2015 - reawakened that hatred and brought it to the foreground again. (It hasn’t served them well, as noted by the constant stream of invective from CPC comms, and stubbornly low polling numbers that show they would come out of an election with fewer seats than Scheer was able to capture)
However, Kenney’s choice of a constitutional amendment on equalization plays into this. The last several years, playing the “NEP 2.0” card simply hasn’t gotten the party the traction they need.  The majority of voters today aren’t old enough to remember the NEP, and many of them look at it as irrelevant.  The conservatives need a new drum to bang on, and they’ve chosen equalization.

Choosing equalization is, from a conservative perspective, a good strategy.  The program itself is largely poorly understood by Canadians, making it very easy for a few creatively written misrepresentations of it to become “true” in the minds of voters.  It’s easy to demonize, especially in a province like Alberta where there is a significant degree of “pull yourself up by your own bootstraps” mythology.
Second, it creates another issue that conservatives can use to attack the 1980 Constitution, and in particular the Charter.  Remember that long-festering hatred of the Trudeau name I mentioned earlier?  Going after S36(2) forces open the door to making other consequential amendments as well.  Make no mistake about it, the conservatives will happily go after numerous parts of the Charter to reshape it into the more hierarchical model they prefer - or even go so far as to render it all but inert with a few cleverly worded clauses added or removed.
Expect to see equalization become a “fact” of Alberta conservative politics in the next few years.  It will become quietly ignored that the last revision of the legislation done was done under Harper (a conservative PM from Alberta), instead, they will demonize it as a “Trudeau program” and that it is “unfair to Alberta”.  In the rest of the country, the Federal conservatives will continue to pick it up and attack it as “divisive” and “unnecessary”.
The goal, of course, will not be to make the program better or more robust, but rather the goal is to set the conditions so that a conservative government will be able to open the constitution up and gut it.
at June 08, 2021