Twisting the Night Away ...

I won’t waste much time directly addressing the attempted coup that took place in Washington, D.C. on Wednesday this past week. Others have already covered it in considerable depth, and the fallout will no doubt take months or more to sort out.

However, Maclean’s decided to publish something today that I think deserves to be smacked around for continuing exactly the patterns that I have become increasingly critical of conservatism in Canada for following.

The column, entitled “Let’s Not Waste This Crisis in American Democracy”, and is written by former Harper-era communications guy Andrew MacDougall.  Please, go and read it.  When you are done reading it, I’ll explain just how twisted it really is.

First, MacDougall, is correct about one thing:  The same poisons that led to last Wednesday’s attempted coup exist in Canadian politics.  We absolutely should not believe that because we are north of the 49th parallel that somehow we aren’t affected by Trumpism.  It's here, and it has been for some time.  Whether it's Erin O'Toole adopting "Take Canada Back" as a slogan, or his "Canada First" policy, it's there and it's right in front of you. 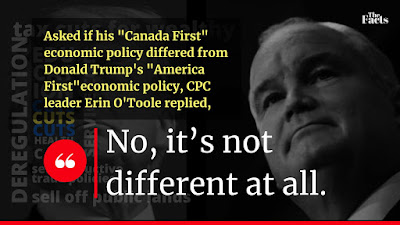 After that, the entire article turns into an exercise in twisting, misleading, and outright denial.
Let's start out with this little gem (which is on the first page, BTW): 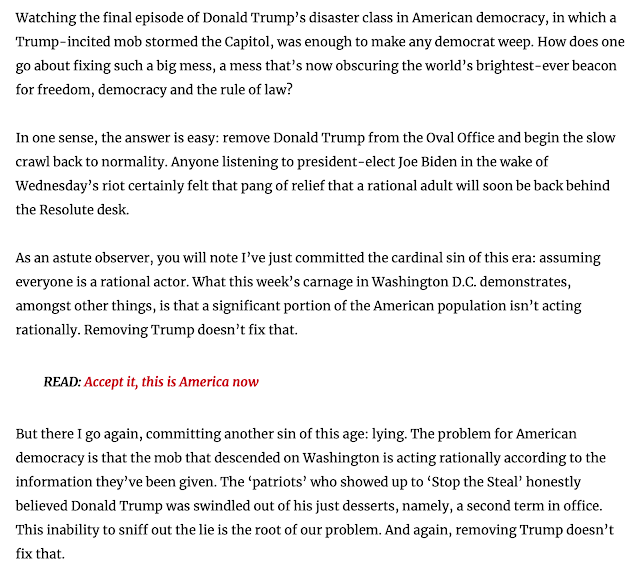 Mr. MacDougall's tactic here is a bit of sleight of hand. He is arguing that the "real problem" here is that nobody knows what the facts are.  Except we do know what the facts are. The fact is that going back to the 1988 US election cycle, the political right has been specifically manipulating people emotionally, and that has been escalating ever since. Here in Alberta, Jason Kenney spent from 2015 to 2019 demonizing the NDP government elected in 2015 using emotional arguments - and voters fell for it.
I want to be very, very clear here, Trump's 4 years wasn't the emergence of something new and malignant in our politics.  It was the culmination of a decades-long campaign on the political right in both Canada and the US. Conservative political campaigns have become campaigns of _FEAR_.  Scare the living hell out of people with whatever monster you can dream up - be that deficits, terrorism, whatever, and then beat the public senseless with repeating (and nasty) messages.  Even a slogan like "Take Back Canada" (or Take Back America) is a fear slogan - it plays to fears among some that your country is being "overrun" by some nameless, faceless "other" that has to be stopped.  In 2015, we had Canada's Stephen Harper throw out the phrase "Old Stock Canadians" (and no, that wasn't a reference to the indigenous peoples - it was a reference to white European settlers) - coded language to be sure, but it played to the same fears as O'Toole's "Take Back Canada". 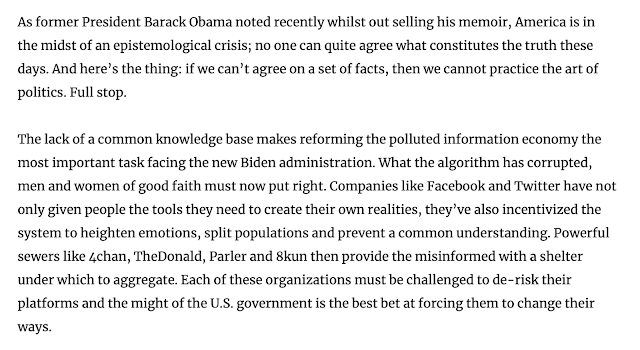 ... and here is where he twists for the first time. Note that MacDougall correctly notes that "agreeing on facts" has become a problem. He's correct, but then he slides responsibility for that onto someone else's plate - in this case, the incoming "left wing" Biden administration. This little bit of deft, but dishonest, sleight of hand sets the stage for the rest of MacDougall's arguments. He's not arguing that _conservatives_ need to change.  No, instead, he's trying to make it a "systemic" problem.  Oh, the media's "biased", or Facebook is "biased", or Twitter is a cesspool, etc.
Let's examine this for a moment, and I'm going to focus specifically on Trump era conservatism here. Media bias?  Absolutely - Fox is owned by conservatives, and to call their journalism slanted is being generous.  Trump used that bias to great political advantage, accusing anyone who dared challenge him of being "FAKE NEWS". Here in Alberta, the majority of major daily newspapers and other media are owned and controlled by conservative interests, and it shows.  PostMedia rarely dares publish anything remotely critical of Jason Kenney unless he cannonballs himself into the sewage lagoon as he did over New Year's with news of his cabinet taking vacations.
Twitter and Facebook were both all too happy to let Trump have a voice on their platforms even when it was clear that he was lying.  Twitter started flagging some of Trump's utterances as suspect late in the campaign when it was becoming clear that the odds of winning were sliding against him.
The problem here is not "systemic" - it's that the political right decided a long time ago that it could lie with impunity by repeating the lie. That's what got us the Iraq war.  Remember Karl Rove snidely dismissing the "reality-based community" that was objecting to invading Iraq on the basis of the very suspect "evidence" that was being put forward?  Yeah - that entire war was based on lies.  It wasn't that there was a "disagreement over facts". The disagreement was literally over the right wing's use of lies and propaganda to foment that war. 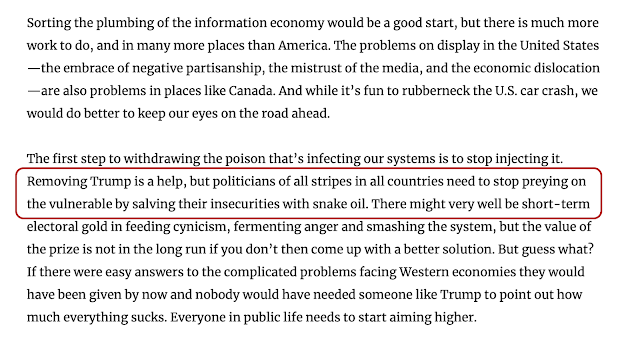 ... and now MacDougall slides right into the swamps of "BothSideism".  We are to understand that "both sides" are bad here, and both sides are "poisoning" political discourse. Except that really isn't the case.  Yes, periodically, left wing politicians get caught out in a lie of one sort or another.  Usually that's a single politician getting caught with their hand in the cookie jar, or having done something stupid in the past. (Although, I will admit that I find the current Federal NDP's leadership has been a little too quick to repeat CPC talking points on the WE "Scandal").  Kenney in Alberta reflexively went to lying in his press conference about his wayward MPs who travelled abroad over Christmas ... in a pandemic ... claiming that he had "no idea they had travelled abroad" - a lie which was called out almost immediately on Twitter.
The difference is systemic within conservative political strategy.  It's one thing to lie about some facet of your policy, or to accuse your opponents of having misrepresented themselves.  Once conservatives discovered they could get away with overt lies about who and what they are in the G. W. Bush years, it escalated rapidly.  Harper used snake oil policies all the time.  So called "boutique tax credits" that inevitably were only accessible to those with money are a good example. "Great - I can get a tax credit for sending my kid to hockey camp?  Oh - wait I have to shell out thousands in equipment and fees?  So much for that tax credit - I only make $45K a year."
Harper escalated significantly (and badly) in the 2015 election, with phrases like "Old Stock Canadians" that left many scratching their heads because they weren't attuned to that particular dog whistle (your humble scribe had spent far too long in the swamps reading far right forums by then and heard it loud and clear), and the "Barbaric Cultural Practices" hotline. Both of these were overtly racist once you understood what they meant, but let's be clear, they were ideas built on fundamental lies. Not little lies, big ones about immigration - namely the idea that immigrants are the real problems that we are facing.
We should also remember Preston Manning's advocacy to Reform candidates back in the 90s:  "Don't tell people what you really believe, you won't get elected.  Keep quiet about that until you are elected". A moderately successful bit of advice, it didn't stop Reform MPs from making an appalling array of horrendous statements in public.

... and here Mr. MacDougall doubles down on BothSideism, claiming that "the left" is too quick to lump conservatives together as being racist. While not all conservatives are racists, it's stunning the regularity with which we find the conservatives giving a political home to racism.  Whether that is going back to the prairie roots of the Reform party, or turning up in anti-immigration policies like "The Barbaric Cultural Practices" hotline, it's still racism. The political left didn't give those people a political home, conservatism chose to do so starting in the 1980s. Fast forward to Kenney forming the UCP in Alberta, and a surprising number of UCP Candidates had espoused some pretty awful ideas, party officials have made comments criticizing anti-racism efforts, or were found to be partying in the company of racist groups.  Further, cynicism about the concept of racism shows up in the UCP's actions once in power.
One might ask conservative organizers how it is that racists find them to be an attractive political home? If they aren't actively courting these groups, then perhaps the movement needs to take some steps to make sure they aren't appealing to them. It isn't unreasonable for Canadians as a whole to ask just how much influence racists and other forms of bigotry have in the party when the party at both Federal and Provincial levels have in fact proposed, or enacted, racist policies.
As for Social Conservatives, for a sizeable fraction of Canadians, they are an existential threat. SoCons have spent decades attacking everything from abortion rights to LGBTQ people. The "we need a law" crowd want that law to restrict people's lives in ways that there is no evidence to support. Canada's abortion rates have been relatively static for decades since R. v. Morgentaler, and the legislative challenges in creating a law restricting abortion are non-trivial. There's a reason why no government has touched it, and Private Member's legislation on the matter has consistently failed.
No, Mr. MacDougall, the problem isn't "both sides" need to change. Conservatism itself needs to take a long walk in the snow and figure out what it really wants to represent. Will it continue to be the political movement immersed in its own lies?  Will it continue to put forward policies that are clearly designed to attract religious bigots, racists, and others of that ilk? Will it continue to argue that it is better to deceive Canadians than to present a different philosophy about how government should operate?
at January 11, 2021