And The War For Control Over The CPC Begins

With Andrew Scheer announcing his resignation as CPC party leader this week, the war for control over the party begins in earnest.  Make no mistake, this is not a fight between individual candidates espousing different visions for the party.  This is about the factions within the party trying to gain (or maintain) control.

In particular, the Social Conservatives (SoCons) have their eye on "the big prize" - reinforcing the base of control and power that they asserted when they pushed Andrew Scheer up the middle as their second choice behind Brad Trost.  You would think that a group whose beliefs and policies have cost conservatives elections - even in Fortress Alberta - would find themselves on the outside by now.  But, we have to remember that this isn't how SoCons operate - they operate from a well of deep, uncompromising belief that they have the solution, and they are willing to spend a very long time organizing to achieve that goal.

The first volley in that war was published in the National Post yesterday.  Titled "How Social Conservatism Done Right Can Actually Help The Tories Win Again", it is an intriguing view into some of the key mistakes that SoCons have been making for years.  Let's take a closer look.

First, the author claims to be arguing for a "non-religious" social conservatism.  For those of us who have followed the social conservative right wing for any length of time, the non-sequitur that this represents is stunning.

What is perhaps most stunning about this line of argument is how quickly the author slips into the "No True Scotsman" fallacy in his effort to create a distance between his position and the broad distillation of SoCons that he describes but a paragraph or so earlier:

I'm sure that there are a significant number of SoCons who are not particularly religious, but even they will argue that their morality comes from "the bible" in some form when pressed.  The problem that emerges here is that at its core Social Conservatism is fundamentally about imposing a particular set of moral and social structures on people whether they accept them voluntarily or not. 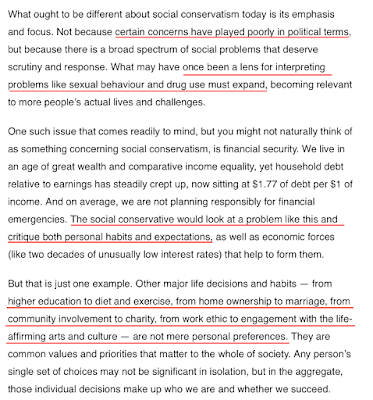 These three paragraphs say so much, and so little at the same time.  On one hand, the author tries to distance himself from the moral hobby horses which have come to dominate SoCon discourse for decades, and then he slips in some subtle, and very broad language about some vague idea of an ideal society in which SoCon values dictate everybody's decision making.

I accuse the author here of being deliberately vague, avoiding any specifics which would enable a serious exploration of the implications of his position.  There is a second reason for the author to be vague - namely it allows for a range of audiences to infer slightly different meanings in what he has said, hoping to draw a "consensus" that isn't muddied by specifics and details.

This is interesting because it turns the focus indirectly to a large number of "moral issues" and equates them with a series of economic factors, and then makes an implicit demand that government must act to "improve" these.  But what exactly does the author mean when he says "improve"?  Lurking within this paragraph are a series of assumptions.  That divorce is "bad", that welfare clients are "bad", that drug users have made "bad choices", and so on.

Of course, the details of any of these are readily challenged.  Is divorce truly worse than staying in a dysfunctional or abusive relationship?  Should you want to be obliged to remain in a relationship where you are being emotionally or physically abused?  Would there be a benefit to society to return to an era where divorce required us to stand before a judge to justify our reasons for divorce?

Addiction to opioids is a particularly high profile problem today.  However, it would be folly to assume that addiction is merely the result of "poor choices".  People come to be addicted through a variety of paths, and dealing addiction and its accompanying issues is by no means trivial.  If there is one thing that the "war on drugs" model has shown us, it is that rigid models such as prohibition simply will not succeed.

Similarly, it is naive to assume that those who end up in poverty are somehow victims of their own decisions resulting in a failure to "thrive".  Society is full of systems that both create and reinforce patterns that result in poverty.  One that I know of offhand is lurking in the Alberta income support program "Alberta Works":  Instead of enabling clients to exit the program gracefully, it pretty much is designed to cut people off the moment they start making any kind of income.  This kind of abrupt cutoff actually amplifies the anxiety felt by many trying to re-enter the workforce, because they fear being abruptly terminated and not being able have any income at all afterwards.  When you have been living on the financial edge for a long period of time, this creates an enormous amount of fear.

Here we come to the classic failing of the conservative movement in Canada for the last 20 odd years.  "It's not us, it's them" is the refrain.  Following 2015, high profile members of the CPC were heard saying that the problem wasn't the policy platform that they offered the public, but the problem was "how they presented it".  Similarly, following the 2019 election, we have heard much the same, or that Canadians didn't "hear" it right.

For the SoCons to claim that it is the fault of "the left" that Canadians find much of their program unpalatable ignores the reality.  The SoCon community has spent decades fighting against a range of issues, from women's health to sexuality.  They have not done themselves any favours by relying on cryptic language to mask over their true intentions.  As they have lost battle after battle, they have tried to move the goalposts, or cover over their intentions with vague, "reasonable" language.

"The left" isn't the problem that SoCons face.  It is in fact their own failure to reflect upon their messages and goals, and understand why the bulk of Canada simply hasn't accepted them as legitimate.  Instead, we get crypto-language arguments that attempt to mask over the nastiness of their agenda.  Marginalizing people, judging them, and denying them access to health care on moral grounds isn't exactly a formula that wins.

Even the SoCon right's current hero, Jason Kenney, had to be evasive as hell on these matters while he was running for office.