On Williams' Defence of Bill 207

In today's Calgary Herald, UCP MLA Daniel Williams has published a defence of his recently introduced legislation on Bill 207.

However, I do think it's worth exploring Mr. Williams' comments about his bill and to examine them more carefully.

The opening claim that Mr. Williams makes needs to be considered carefully, because it is insidious in its implications:

This implies that "conscience rights" have a place of supremacy over other rights enumerated in The Canadian Charter of Rights and Freedoms (The Charter).  Section 2 of The Charter reads as follows:

I must point out that other concepts in The Charter, such as that of "right to the equal protection and equal benefit of the law" (S15), are not declared as arising from the rights in Section 2(a).   This is fundamental, and important to recognize.  To attempt to interpret The Charter in such a fashion is profoundly problematic, especially when one looks at the later sections of The Charter under the headings of Enforcement, and General, where it becomes clear that the intention of the document is neither hierarchical or exclusive.

Section 26, for example, clearly opens the doors to the inclusion of other rights - such as the right to access medical care.

Moving on to the next claim in Mr. Williams' column:

Mr. Williams makes the somewhat bold claim that his legislation "does not restrict access to medical care".  However, that claim only stands up to a particularly narrow interpretation of the bill.  Whilst I can agree that the legislation does not create a specific obstacle to accessing a specific treatment (e.g. abortion), section 3 of Bill 207 creates a situation where practitioners can act to confound their client's access to care by refusing to provide even a referral to the client.

He attempts to justify this through the lens of providing a referral is same as being complicit in the act which the practitioner objects to.

The problem with the "complicity" argument from an ethical standpoint is twofold.

First, it extends a practitioner's ethical responsibilities beyond the scope of their practice.  It implies that the referring practitioner is somehow ethically responsible for the decisions made between the client and the practitioner who received the referral.

Second, the complicity lens is used almost exclusively to justify a practitioner confounding a client's desire to access treatment.  Short of the client being incompetent to make such choices themselves, this is a further breach of fundamental principles of health care ethics.

At this point, I would also like to point out that health care providers possess a great deal of power in their relationship with their clients.  While a client may well be clear in their decision making, the practitioner is in the position of deciding whether, and how, to provide that service.  This weights the situation heavily in favour of the practitioner, and places the client at a significant disadvantage.  Most health care related ethical codes advise strongly against confounding a client's decision making because of this imbalance.  Therefore, from an ethical standpoint, the "complicity" argument is profoundly flawed.

In my earlier post on the subject, I noted that the legislation attempts to cut off any examination of a practitioner's "conscience decision".  Mr. Williams attempts to defend that as follows: 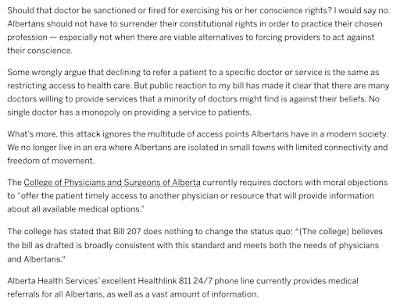 Breaking this defence down a bit, we come to a couple of lines of argument that he is using.  The first line of argument is the "free market" idea that if one practitioner won't offer a service, go down the street to another.  The second is the argument that there are more access points into our health care system than your family doctor (a variation on the "free market" concept, but problematic for different reasons under Bill 207).

First, the Free Market conceptualization is inherently problematic.  For clients who live in smaller centres, the number of practitioners can be quite limited.  What happens when groups of practitioners get together and decide that there are specific services they will work together to blockade?  Where does Bill 207 address these scenarios?  It does not.  Perhaps more concerning, as pointed out in the following editorial from the Edmonton Journal, Bill 207 applies to all regulated health professions in Alberta.  A reality which means that we are talking about much more than just accessing a particular treatment from a doctor.  A pharmacist could choose to refuse to fill your prescription, or in a more extreme situation an EMT could refuse to give you assistance after a traffic accident.

The second line of reasoning, that there are multiple paths to access health care such as 811 is equally flawed, simply by the fact that those services are staffed by people who happen to be part of the same regulated services.  Therefore, one is just as likely to be turned away by "conscientious objectors".

Further, Williams' arguments here quietly ignore the fact that in his efforts to insulate practitioners from potential consequences (read: examination) of "conscience decisions", that the bill strips clients entirely of recourse through either the regulatory colleges themselves or through civil litigation.  While I can appreciate the desire to allow practitioners to work within the boundaries of the moral frameworks that they have, doing so at the expense of stripping clients of any form of recourse seems an extreme step unwarranted by current jurisprudence and existing law.

As an example to consider, this law could enable the following situation:  Consider a traffic accident where a transgender person has been injured.  The attending EMS personnel decide that each has a "conscientious objection" to supporting transgender people and decline to provide treatment on those grounds.  Similarly, if that same person is transported to a Catholic-run hospital, the hospital itself could also decline to furnish treatment (remember, the current Pope has referred to transgender people as being "worse than nuclear bombs").  Under the terms of this legislation, not only would there be no consequences for the practitioners (they merely need to declare it as a "conscience objection"), the patient will find that their ability to demand that this be examined as malpractice is cut off at the kneecaps by sections 5-7.

In case you think half-assed or downright negligent treatment won't happen in the environment created by Bill 207, I invite you to consider what happened to Tyra Hunter, and consider how this bill insulates practitioners from their misdeeds (and therefore undermines the very key principle of protecting the public from malicious practitioners through vehicles such as regulatory colleges).

While Mr. Williams chooses to play naive with this law, it cannot be any coincidence that the people who stand to be most negatively affected are those whose access to treatment is already precarious.  So-called "conscience" objections have been raised not only to abortion, but to the provision of contraceptive treatments for those with female reproductive systems.  LGBTQ people have long been marginalized in their access to treatment, all on "moral" grounds to the extent that one of the most common requests seen on local discussion boards is "which doctor/therapist/pharmacy/etc. is LGBTQ-friendly" coming from people moving into a region.

The calls for this type of legislation come not from the broad body of health practitioners, but from a small vocal minority who seem to be of the opinion that they must be completely consistent with their religious beliefs in all aspects of their lives. Even being charitable to Mr. Williams' intentions in tabling this bill, it is profoundly flawed from the perspective of The Charter and the principle that it embodies that rights exist in tension with one another.