The Alberta Government released its 2018/19 Fiscal Year Budget this past week, and many people are talking about what it does, or does not address.   Yesterday, noted Alberta economist Trevor Tombe released his thoughts on the budget in the form of an editorial piece on CBC.

Normally, Dr. Tombe is someone who sheds more light than shadow on things, but his opinion piece on CBC is not one of those times.  Instead, we are treated to a piece where there are several key assumptions underlying it that I think do a disservice to the discourse in Alberta around public finances and budgets.

CBC kindly puts the following line as a subtitle to the article, so I'll start there:


'What global credit agencies are looking for, this budget doesn’t offer’

My first thought on this is a fairly blunt "who cares?".  More seriously, does anyone believe that these credit agencies have the interests of Albertans at heart?  These entities are, at the end of the day, driven by financial investor interests. They are part of the banking system, and in many ways live in the world of making the banks happy.

From this writer's point of view, by allowing these agencies to "rate" different governments based on their "financial behaviour", we have given them unwarranted political clout - effectively turning them into financial equivalents of lobby organizations like the Fraser Institute.  Instead of "whispering in politicians' ears", they use their "credit rating" lever as a way to influence - and punish - governments.

We have seen several instances where the credit ratings agencies have gone after the NDP government in Alberta - "downgrading" our credit rating for one reason or another.  Yet, their approach has seemed almost partisan.  Did we see a downgrading of our credit rating when ostensibly "conservative" governments went into deficit?  No. We did not.  Yet, the minute it is a "left wing" (and I put that in quotes because the Alberta NDP has been governing from what I would consider a political centre position) party in power, suddenly every time there is a minute change in our fiscal position, we get these rumblings from the credit agencies.  Forgive me for being skeptical, but this starts to look distinctly like it is a partisan issue where the agencies don't like the stripe of the government that was elected, and I am reluctant to ascribe a great deal of significance to the opinions of such organizations.

Of the budget itself, Dr. Tombe seems to feel it is long on aspirations, and short on specifics:


The budget did contain hints of a potential path to a balanced budget.

It described the total revenues, royalties and spending that the NDP government needs to balance by 2023. 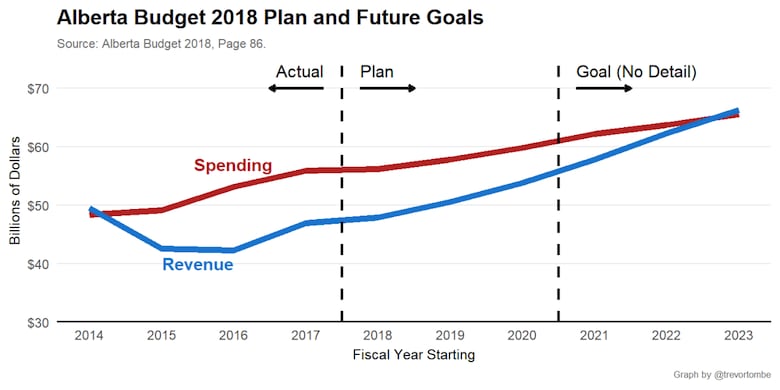 But this does not constitute a plan. It lacks any credible detail. It's an aspiration (barely).

It's one thing to know where we have to go, but it's quite another to map out how to get there. Without that detail, fiscal uncertainty remains.

The government projects spending levels of $65.5 billion by 2023/24. But in what ministries or on which programs is not known.

How much for health, how much for education, how much for community services, and so on? And what of the compassionate cuts the government repeatedly referenced? Your guess is as good as mine.

Anyone with a modicum of experience knows that forecasts which reach beyond the current fiscal year are about as reliable as Scrying when it comes to predicting the future.  Rough revenue/expenditure forecasts are as far as I expect such projections to go.  There may be more detailed analyses lurking about in various departmental budget files, but frankly they are irrelevant to the overall forecasts.  Past governments have often put "detailed" plans into their budgets, giving a false sense of detail to them.  Inevitably, reality tends to come along and swat those detailed prior year plans with a baseball bat.  Political, and fiscal, realities tend to shift and change dramatically with time, and to argue that such forecasting provides the credit rating types with "certainty" is at best a polite fiction, at worst, it becomes an attempt for today's politicians to hamstring tomorrow's with expectations and constraints that will have little to do with the realities seen in the moment.

The second major issue that appears in this segment is Tombe's apparent expectation that any "responsible" fiscal plan must include some kind of cuts to the apparatus of government.  I take a great deal of exception to this.  At no time has anyone shown that such cuts are necessary.  In fact, I would go so far as to argue that cuts may in fact be quite undesirable in the face of other options which remain unexplored in this province.  Alberta is a province which has repeatedly refused to even begin to fully exercise its full fiscal capacity in terms of revenues.  We have cut personal and corporate taxes to levels unheard of outside of the United States, we have no sales tax, and a variety of royalty giveaways, subsidies, etc. to various resource industries have all cut into our ability to weather the inevitable fiscal storms that accompany having an economy dependent upon the sale of raw extraction resources whose price is driven by "world markets".

There seems to be a pervasive assumption that the moment there is a downturn in the economy that we must immediately start hacking up the apparatus of government in order to meet this ephemeral goal of a balanced budget.  I do not agree that this is reasonable.

Mr. Tombe's argument ignores a key reality:  just because the economy has dropped does not mean that the business of government has suddenly shrunk in proportion.  The number of people requiring health care, students in our schools and so on does not magically drop when the oil patch suddenly lays of tens of thousands of workers. If anything, it is at such times that it is most important to sustain those government services. Not only will demand on them be higher than it once was, but it will likely remain so until the shock waves of the downturn have subsided to the point that we have sustained positive growth.


For starters, Albertans have now seen five deficit budgets in a row.

Low oil prices made this unavoidable. But with economic recovery underway, we must turn to balancing the books without relying on royalties. If not now, when?

Alberta has seen many downgrades in recent years, but not because we're drowning in debt as some suggest. Alberta has the strongest balance sheet in the country, now and for the foreseeable future. From such a position of strength, Alberta's government can make far more careful, nuanced, and longer-term fiscal decisions. But they aren't.

To this, I must ask of Dr. Tombe the same thing that I ask of politicians who go on and on about how the government must "tighten its belt" (*cough* Jason Kenney *cough*):


What are your specific suggestions here?

It is one thing to criticize the sitting government on such matters, but quite another to simply argue that "better decisions" could be made.  If you wish to argue for significant cuts in the government's spending, we need to do far better than simply saying "axe 20% of the budget".  We lived through that little bit of political theatrics with Klein - and we're still paying the freight for it in terms of major infrastructure projects which have been kicked down the road so far that the cost of those projects has been hit by inflation to such an extent that they are many times what they would have been had we been more active in getting on top of it.  We often hear about Klein's "moment" of announcing that our debt had been paid off, but we seldom hear about how that fiscal debt was eliminated by shovelling most of it into deferred infrastructure costs.  Needed hospitals did not get built, roads we need did not get funding, class sizes in our schools grew, and maintenance on public infrastructure was deferred for so long that buildings which were viable, but deteriorating, a dozen years ago now must be closed because the cost of repairing them has exceeded the value of the building itself.


We're as reliant on royalties as ever. Despite government claims to the contrary.

In Budget 2018, we need $12.6 billion in resource revenues to balance — an amount Alberta has only seen once before (in 2005/06). To shrink our reliance, we need to shrink the deficit without relying on royalties. And we aren't.

Between now and 2023-24, royalty growth delivers three-quarters of what the government is counting on to balance.

Alberta's dependence on resource royalties is not news to anybody.  It became a structural part of our government's finances back in the 1980s when Don Getty first decided to "raid the piggy bank" to reduce the government deficit, and stopped putting money into the Heritage Savings Trust Fund (HSTF).  In the subsequent years, a succession of governments has repeatedly poisoned the political well related to any form of increase in government revenues - whether that is increasing personal tax rates or instituting a Provincial Sales Tax (PST).  This has created a political atmosphere in the province which makes it very difficult for a government of any stripe to do anything reasonable with revenues.  We have been told that "taxes are bad" (they aren't), that we don't need a PST because we have so much oil revenue (which has repeatedly proven to be an unreliable stream of revenue).  This means that getting Alberta off the dependency on resource royalties to meet its fiscal needs is not a five year project, but rather it is a process which will take decades.

So, while the 2018 budget from the Alberta NDP may not be everything that various parties would like to see, perhaps we need to put a bit of a reality check on exactly what we are expecting.  Mr. Tombe's argument rests on some troubling assumptions that deserve more discussion in Alberta's political sphere:

1.  The role and influence of credit rating agencies. Do they have unwarranted power and influence?
2.  The assumption that "fiscal responsibility" means "cuts to government programs" - does it, and should it ?
3.  The political realities created by decades of governments poisoning the political well around ensuring adequate fiscal resources for normal operations.
4.  The often hidden costs of balancing the fiscal books at the expense of other aspects of the government's responsibilities.