Con$ Only Want Cons To Vote

Bill C-23 is an appalling piece of legislation.  It is filled with more underhanded deceitfulness than any piece of legislation should ever contain.  If there ever was any doubt about the motivations of the Harper Government in tabling this piece of poison, I think Senator Linda Frum's comments on Twitter yesterday did that in: 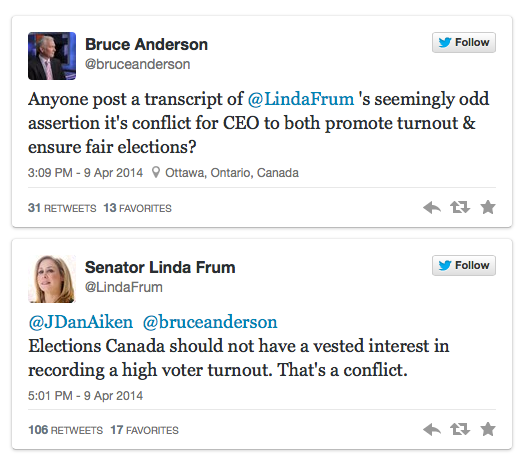 Wait a second, the argument basically becomes "a fair election is one where the motivated voters win".  That is, of course, far from the truth.  In our democracy, it is a plurality of votes cast that wins. In the hyper-partisan world of The Harper Government, it is instinctive for the Con$ to argue that getting out the vote is necessarily a "partisan" activity.  If you aren't a Con$ supporter, they would really much rather that you stayed home.

Elections Canada encouraging _all_ voters to get out and vote works against the Con$ - they know full well that historically, the majority of Canadians will vote against them if they actually vote.  So, they claim that it is a "conflict of interest".  Elections Canada however, rightly recognizes that there is a threshold voter turnout below which the legitimacy of an election's outcome becomes questionable in the collective minds of Canadians.  I'm not sure what that line is, but I would imagine that if only 20% of the eligible voters turned out, that the 80% who did not vote might rightly argue that the government elected has no legitimate mandate to govern.

A free and fair election is one not only where a government is elected, but that it is seen to be legitimately elected by a plurality of the eligible voters casting their ballots.

We all know that parties spend huge money on their GOTV efforts on voting day.  We also know that the Con$ in particular go out of their way to get out _their_ vote and if they can discourage non-supporters from voting (e.g. Robocall Scandal), they will do that too.

In an election, parties have a natural desire to ensure that their supporters vote.  However, party supporter lists do not include all voters, and _all_ voters have the right to vote and should be encouraged to do so.

The fact that the Harper Government thieves are arguing that a non-partisan GOTV effort is a "conflict of interest" tells us that in their mind that their interests are purely to discourage those who are not partisan supporters from participating in our democracy.  This is NOT democratic.